skip to main | skip to sidebar

For Your Eyes Only

On a recent holiday to Italy we visited Cortina d'Ampezzo which is right in the middle of the Dolomites in Northern Italy. It is a gorgeous town and also the site of the ski scenes of the James Bond Film - For Your Eyes Only with Roger Moore.

In this town we visited the following Bond sites: 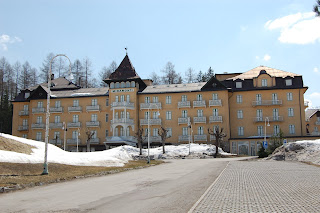 This is the Grand Hotel Miramonti, seemed closed when we visited in April 2009 but has the most magnificent view and it is the hotel where Bond stayed and you see the scene with Bibi where she surprised Bond in her room.

When Bond first reaches his hotel room, he turns on the hot water and a hidden message appears with the words 'Tofana'. Tofana is the top of a mountain nearby and is reached by cable car - Freccia Nel Cielo. We went in winter and discovered to my disappointment that it only goes to the top (Tofana) during the Summer months. We were only able to go up to the second station. It takes three different cable car rides to reach the summit at around 3,000m. Still, it was pretty cool. 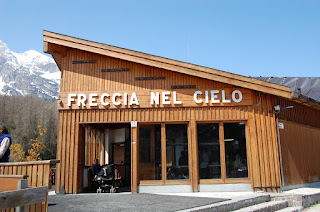 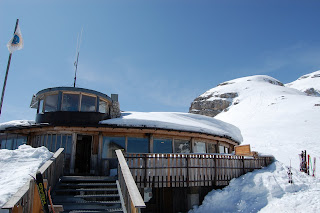 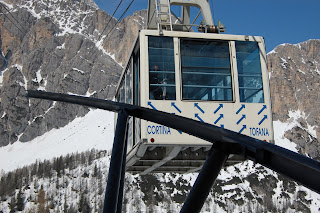 Part of the movie is shot at the Olympic Ice Skating Stadium which is one of the easiest things to find in Cortina. Cortina held the Winter Olympics in 1956 I think! So there are a number of Olympic facilities here but some are in disrepair but the Stadium has been updated and modernised. It was closed so we couldn't get in to have a look. 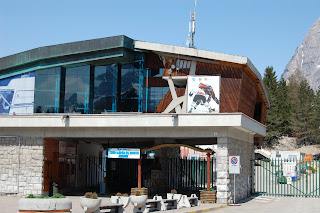 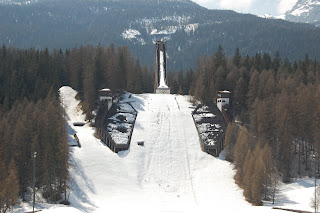 Not far from the Hotel Miramonti is the Olympic Ski Jump which features prominently in the movie. Bond jumps off this and begins the ski chase through the woods.

During the ski chase Bond jumps onto a bobsled track and is pursued by motorbikes. The only bobsled track in town can be seen as you come down on the last cable car. It is snowed over and doesn't look like it is used anymore. 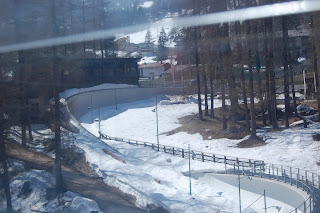 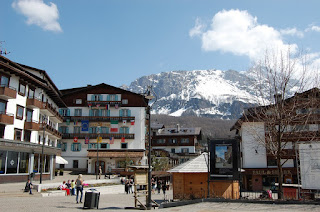 There is also a scene in the middle of Cortina where Bond and his girl are almost run down by baddies on motorbikes again. Gorgeous place, but was mostly shut due to the Easter Sunday Holiday.
Posted by Simon at 11:17 AM

Labels: Cortina D'Ampezzo, For Your Eyes Only, James Bond, Tofana

Simon
Vienna, Austria
Currently living in Vienna, have always been a fan of James Bond films, in particular the Vienna scenes of The Living Daylights. Now I am in Vienna for three years, I thought I would make the most of it and visit as many Bond sites as I can while I am in Europe.